I find it annoying when people are like, ‘You’re SO busy…’”

Jack Antonoff is sitting in front of a huge mixing desk at Electric Lady Studios in New York City, repping a T-shirt emblazoned with the legendary establishment’s logo. ”It’s like, maybe you only just know about these three records that are coming out this summer! And maybe you have no idea how long they took!”

The three records he’s talking about include Lorde’s eye-wateringly-anticipated new album ‘Solar Power’, Clairo’s recently-released second LP ‘Sling’, and his own, just-released Bleachers record, ‘Take The Sadness Out Of Saturday Night’. And that’s not even the half of it.

As frontman of Bleachers, the 37-year-old writes anthemic songs about sadness and trauma. As Jack Antonoff the producer, however, he is somewhat ubiquitous, having worked on some of the most successful and critically acclaimed alt-pop albums of the last five years: Lorde’s ‘Melodrama’, Taylor Swift’s ‘folklore’ and ‘evermore’, Lana Del Rey’s ‘Norman Fucking Rockwell!’ and ‘Chemtrails Over The Country Club’, and St Vincent’s ‘MASSEDUCTION’ and ‘Daddy’s Home’. They are the type of albums that, put simply, change lives, swathed in raw emotion, beautiful storytelling and unexpectedly personal self-analysis from some of the most noted women on the planet.

Jack meanwhile is no stranger to a little introspection of his own. ‘Take The Sadness Out of Saturday Night’ is a record about framing life through the lens of the bad things that happen to you – and the danger of doing that for too long.

“My work is never comfortable,” he says, prodding at the bridge of his glasses. “That’s the best way I can describe songwriting or production – you’re grabbing at things you don’t know, which is very uncomfortable. You don’t write songs about things you know, because that would be boring, right? So you write songs about the quiet voices, the ones you can hear shouting in the distance, the ones that make you go: ‘What is that?’” 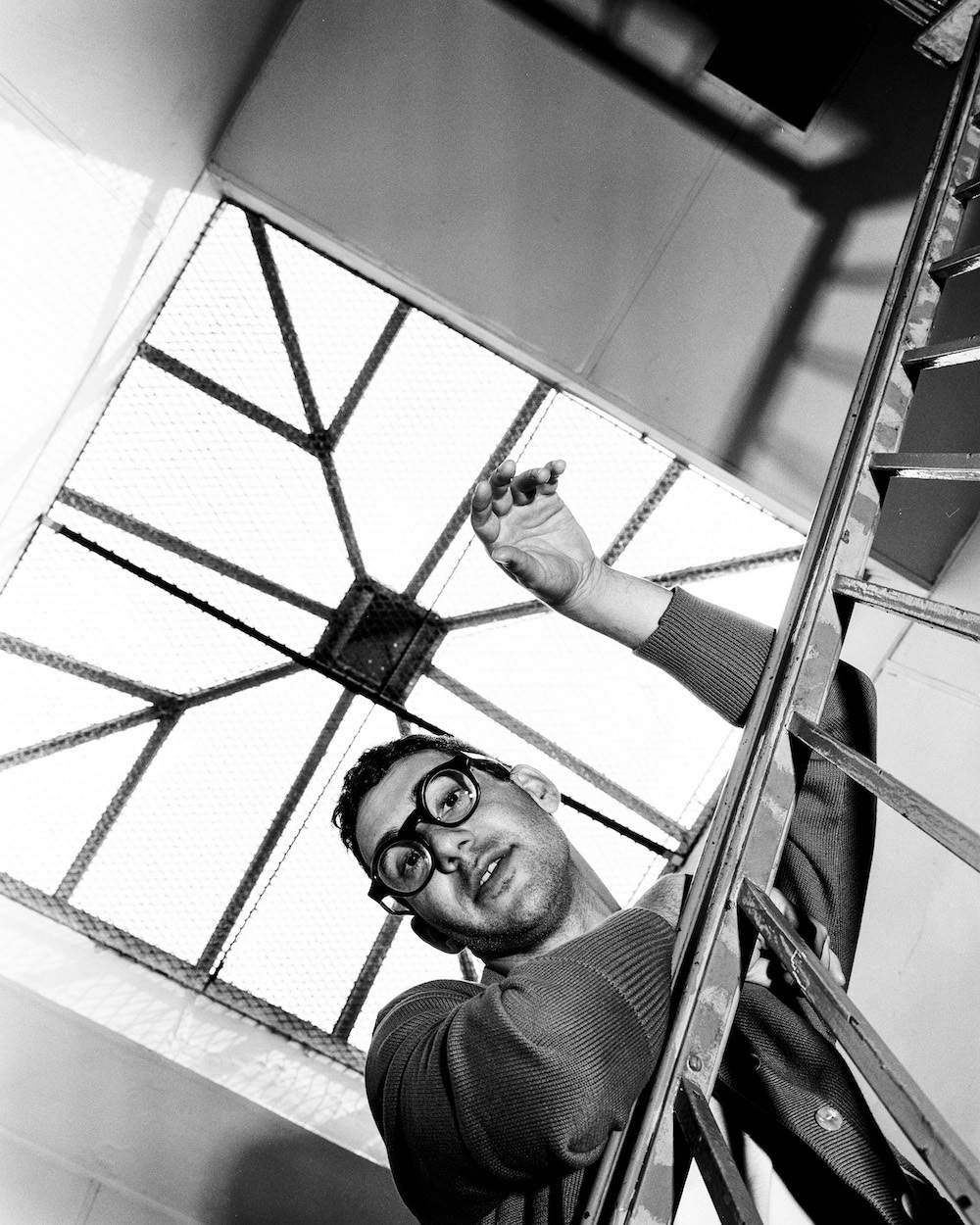 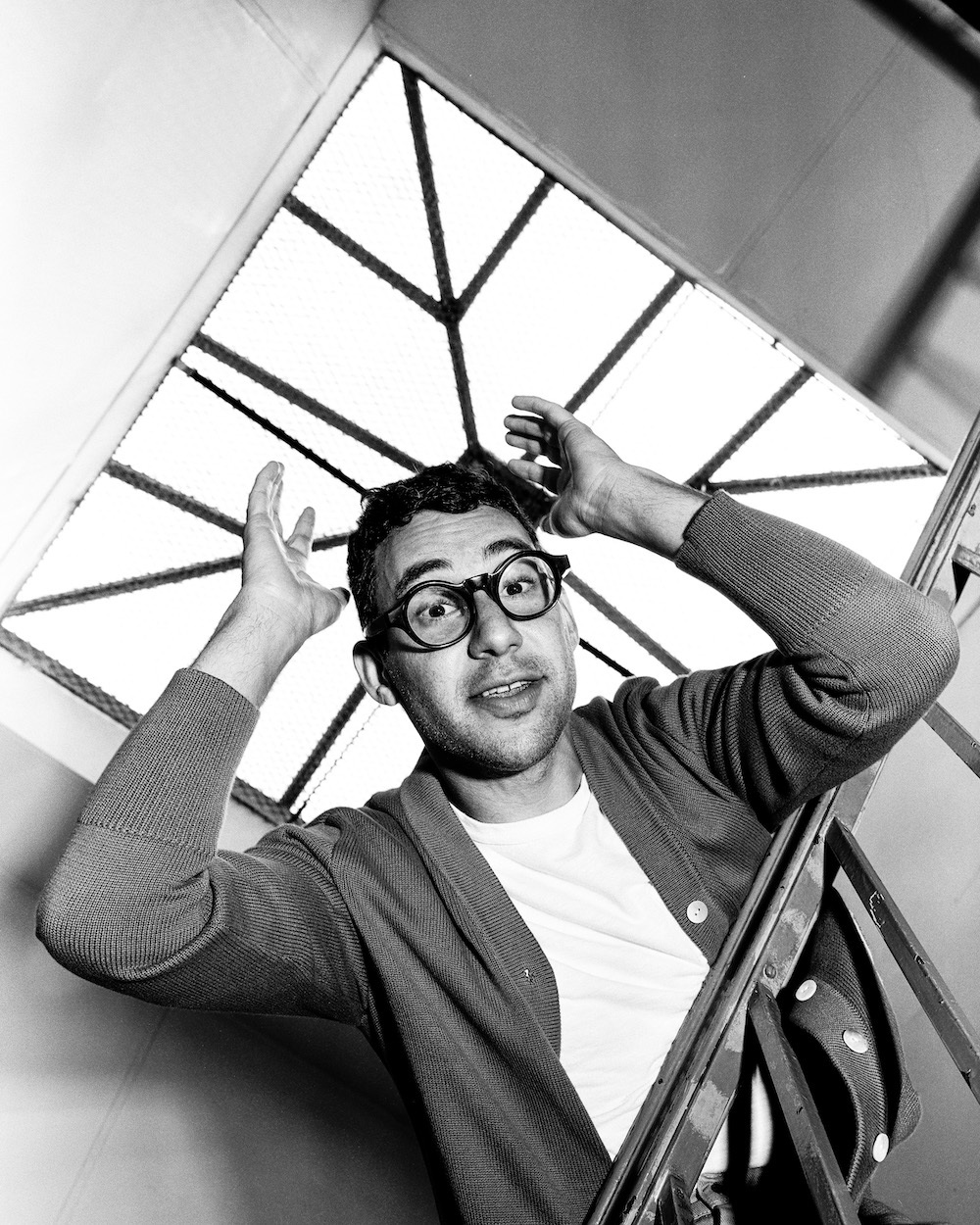 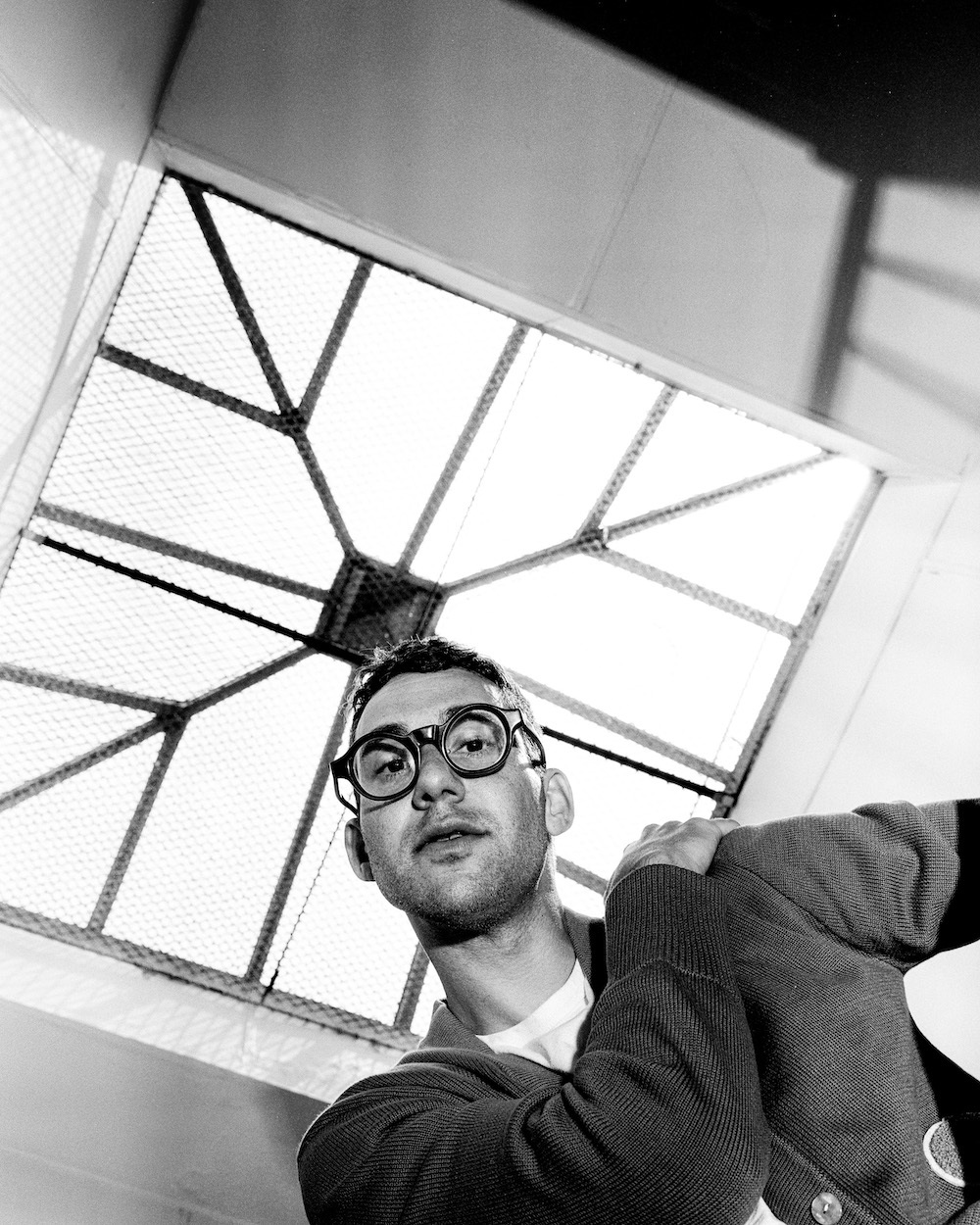 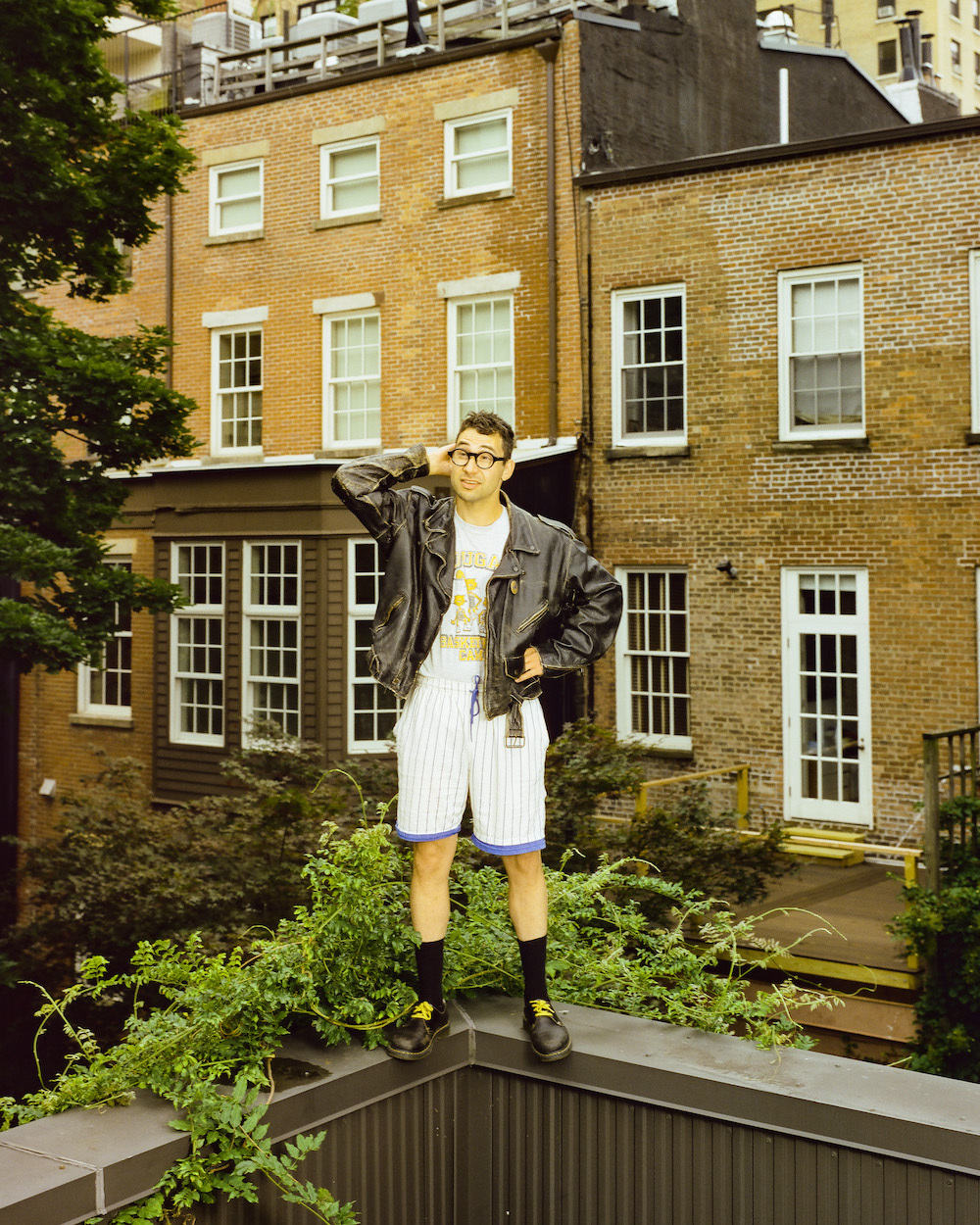 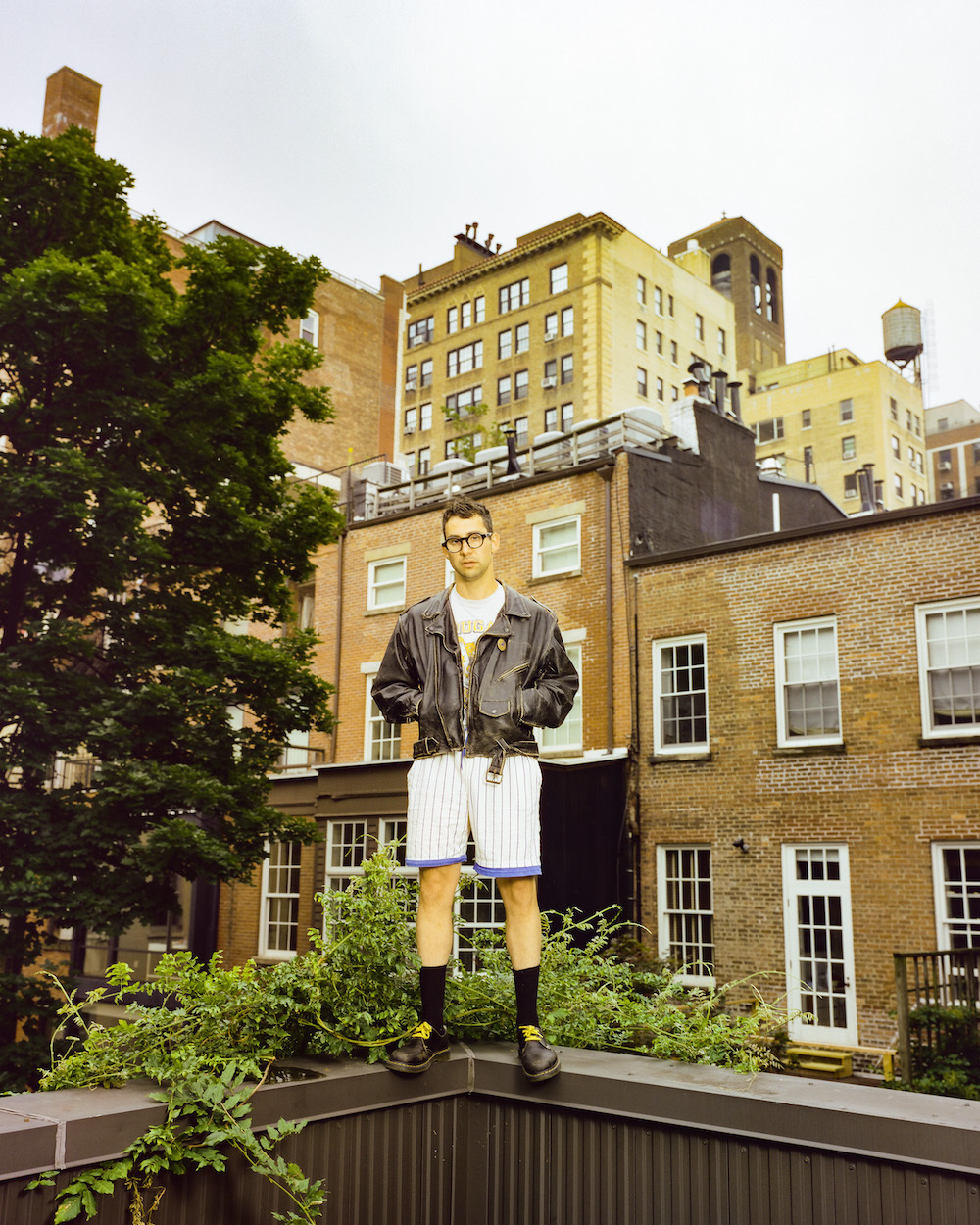 “[I] write songs about the quiet voices, the ones you can hear shouting in the distance, the ones that make you go: ‘What is that?’”

The Antonoff family know the weight of life-defining loss. Jack’s younger sister Sarah passed away when she was 13 of brain cancer, when Jack himself was just 18. It is a relentless kind of trauma, a grief Antonoff has dissected both privately and through his work on two previous Bleachers albums. But where before, that loss was palpable, spilling out through his songs (see: debut album ‘Strange Desire’’s ‘I Wanna Get Better’, and 2017 follow up ‘Gone Now’’s ‘I Miss Those Days’) this time, he’s asking: What would happen if everything WASN’T defined by that one tragic event?

“When my sister died it did this thing, which I’m really starting to realise now, where because it’s such a massive life event, you become a genius in one language – maybe it’s grief – and such an infant in others,” he explains. “So if you feel like shit, if you have panic attacks, if you’re bad at relationships, it is all because this thing happened. And so you don’t get to discover yourself outside of it.”

It feels like quite a seismic realisation for someone who has lived with that burden for almost two decades. “You just get to a point where you’re there, and you’ve got all this baggage, and you can’t quite fit through the doorway,” he explains. “So you say, ‘OK, I’ve talked about grief forever, maybe there are other things that are worth looking at, that I’ve missed because I’ve been so obsessed with this big thing’.”

‘Take The Sadness Out of Saturday Night’, then, is an attempt to get through the door, to see the world – for the first time in a long time – unclouded by that pain, even if just to make space for some of life’s other shitty experiences.

Album opener ‘91’ is a track set in a time before the loss of his sister. It’s a song that acknowledges that perhaps things weren’t perfect, even then. Somewhat surprisingly, its co-writer (one of many on this record) is British author, Zadie Smith. The pair met in New York, where Smith lives and lectures at New York University, and they got to talking. “I had never worked with someone who didn’t write within music, but all of a sudden, when playing it to her, I thought, ‘She can help me frame it’,” Jack says of the collaboration. “She did a beautiful job and, you know, it’s one of my favourite songs I’ve ever made.”

With collaboration and symbiotic relationships at Jack’s core, the guests on ‘Take The Sadness…’ breeze in and out, hidden in the liner notes, adding an idea here or there. Lana Del Rey co-writes on one song (‘Don’t Go Dark’); St Vincent sings backing vocals and produces on another (‘Stop Making This Hurt’), and Jack’s hometown hero, Mr Bruce Springsteen, joins him for gravelly love song ‘Chinatown’. 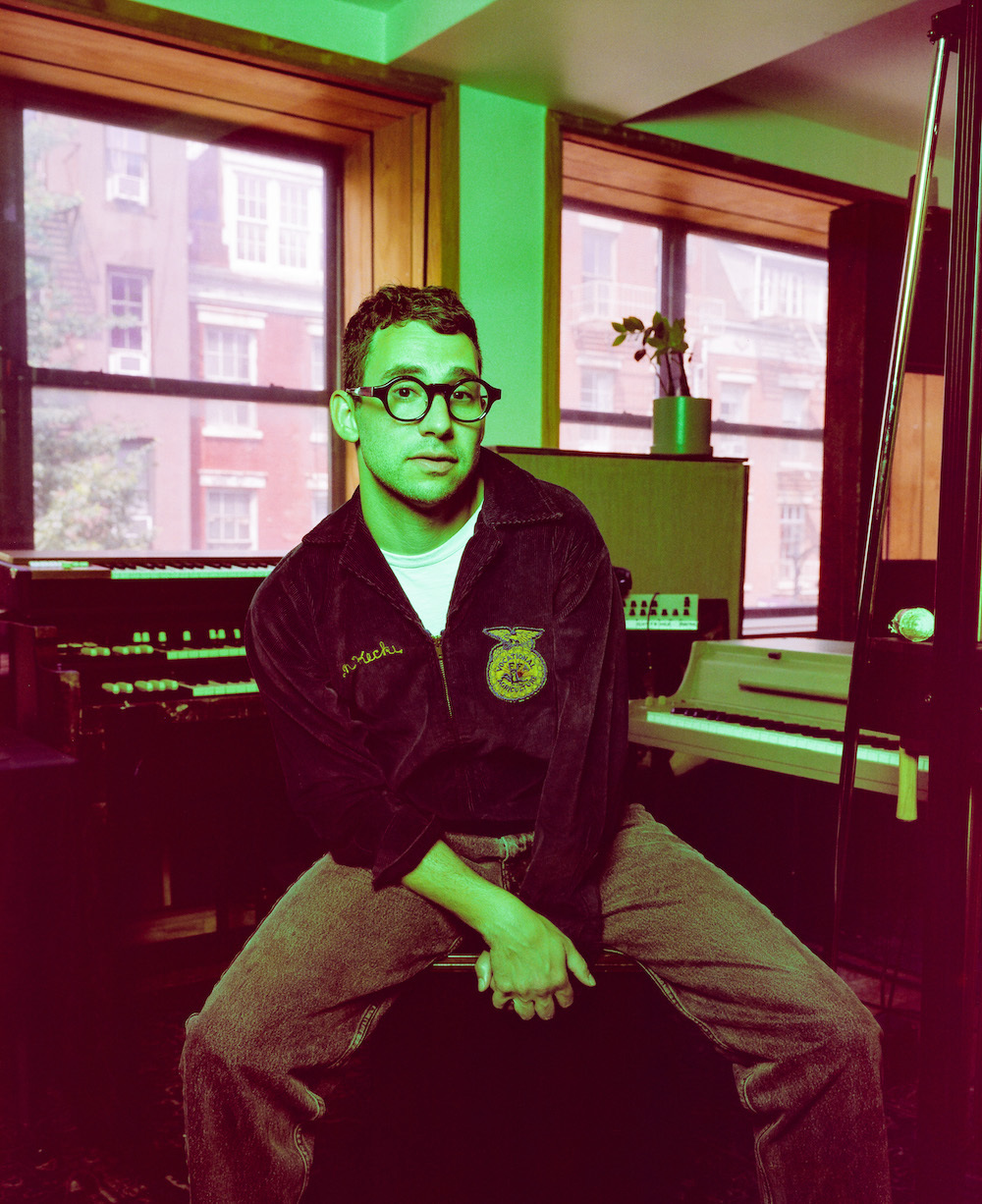 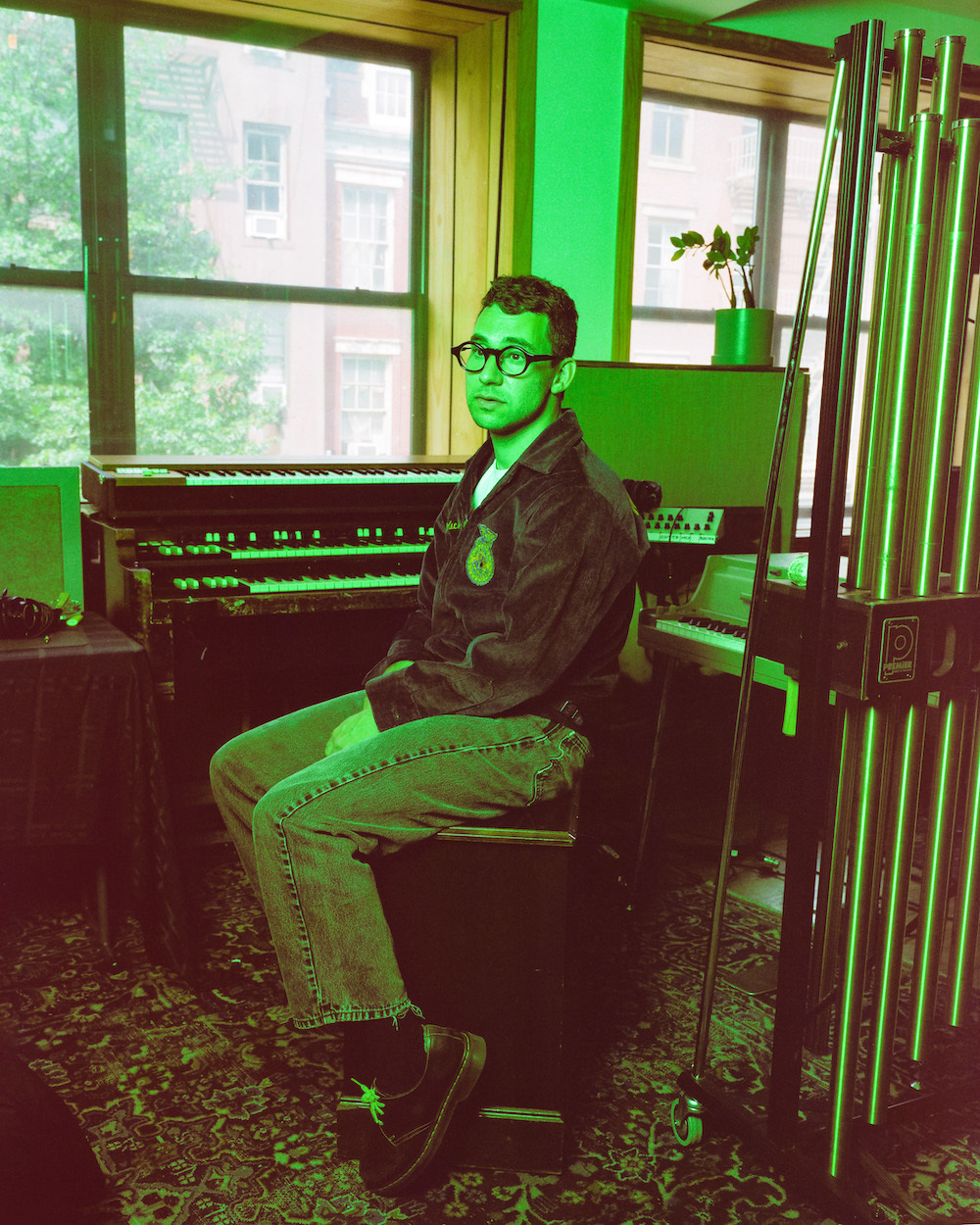 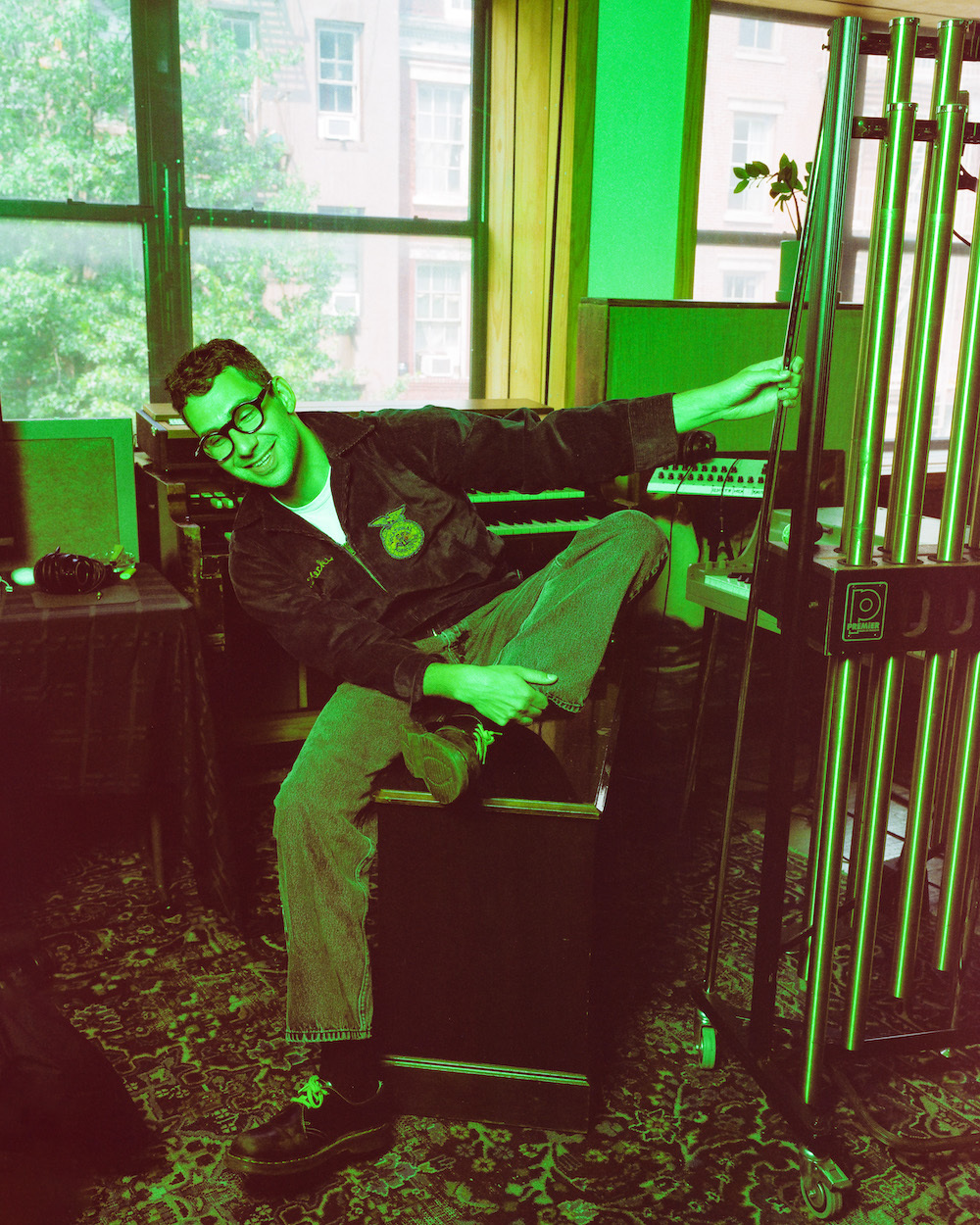 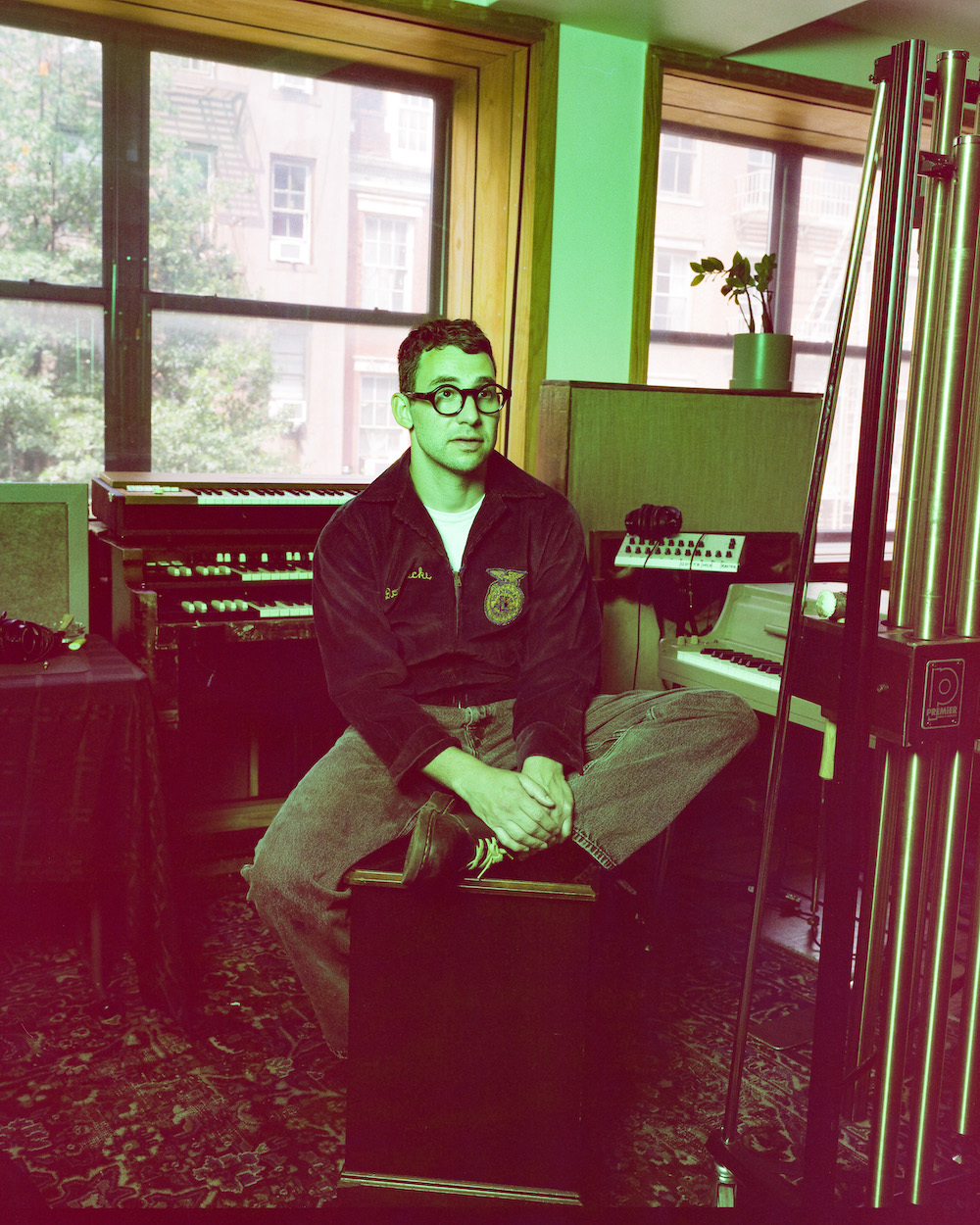 Growing up in New Jersey, Springsteen was a huge influence on a young Antonoff – something that’s felt in the specificity of characters he details in his own songs and, arguably, those with Taylor Swift too. The Jersey boys have become firm friends over the years, and ‘Chinatown’ reportedly came together naturally; Jack played it to Springsteen while at his house, and Bruce decided to lay down a verse. But as much as Antonoff professes not be starstruck, does the weight of making a music video with your idol never cause a few ‘what the fuck?’ moments?

“Honestly, Bruce is just my guy, he’s my friend, he’s the best. And he’s kinda just as advertised,” he insists. “It’s not weird because [his influence on me] is an open dialogue. It’s easy to be disarmed by people who aren’t projecting the mythology of themselves but are just real. That’s true of all the artists I work with.”

OK, but does he think it’s weird that you dress like him though?

“Dress like him?” asks Jack, wearing one of his rotating combos of white tee and stonewashed denim (sound familiar?). “I think I dress like Rick Moranis in Honey I Shrunk The Kids, so I don’t know if that plays…”

Jack Antonoff has been writing songs for 26 years. His first, a little ditty called ‘Last Week’s Lunch’, penned at age 11, was about discovering a forgotten sandwich bag in your locker. “It wasn’t my finest work but it was well-received,” he quips. “If I had to really consider it, maybe it was a bit of a meditation on something going bad – something prepared by one’s mother, you know? Something maternal going wrong? Which I guess are concepts I’m still digging into in some way.”

At school, he became immersed in the New Jersey punk scene, forming Less Than Jake and NOFX-leaning band Outline with some classmates. At that time, music for Jack was all about community and “finding your people” – whether they turned up to the shows or not. New Jersey and its unique sensibility has always been a huge influence on his sound. “It’s a very specific thing,” he explains. “New York and New Jersey are staring at each other – or rather, New Jersey is staring at New York and New York is staring at itself – so it’s the ultimate life outside the party, the ultimate younger brother, and it creates so much devastation and hope.”

Outline hit the road during Jack’s late teens and early twenties, booking their own shows, searching for “their people” in towns across America. Next, came a new band, Steel Train, and his first foray into being a frontman. From there, he joined Fun. as guitarist and drummer, and soon came to know huge chart success with supermassive pop song ‘We Are Young’. The idea for Bleachers came while on the road with Fun., inspired by the iconography of John Hughes movies and their…