Dozens of shoppers have been pictured queuing to get into Bunnings stores with packed car parks forcing vehicles to spill out onto the streets in a last ditch effort to get their hands on DIY goods and homewares before it closes for the foreseeable future.

Images from Rockdale and Artarmon warehouse outlets show huge lines of people waiting to get inside despite Bunnings caving in to media pressure last week and announcing they would no longer let customers inside unless they were tradesman.

A string of retailers such as garden centres, hardware stores and office and pet supply chains will all be forced to shut from Monday and offer click and collect services only in 12 LGAs of concern in Sydney’s west and south-west.

But the popular hardware retailer went a step further, saying they would close all its stores in Greater Sydney to reduce movement of people between LGAs.

‘This is in support of the government and for the safety and security of team members, customers and the community,’ Bunnings managing director Mike Schneider said.

‘We know from experience that applying a consistent approach across a metropolitan area is easier for our team to manage and helps reduce travel by residents between LGAs.’

Pictures from Saturday suggest the mandate is yet to be enforced. 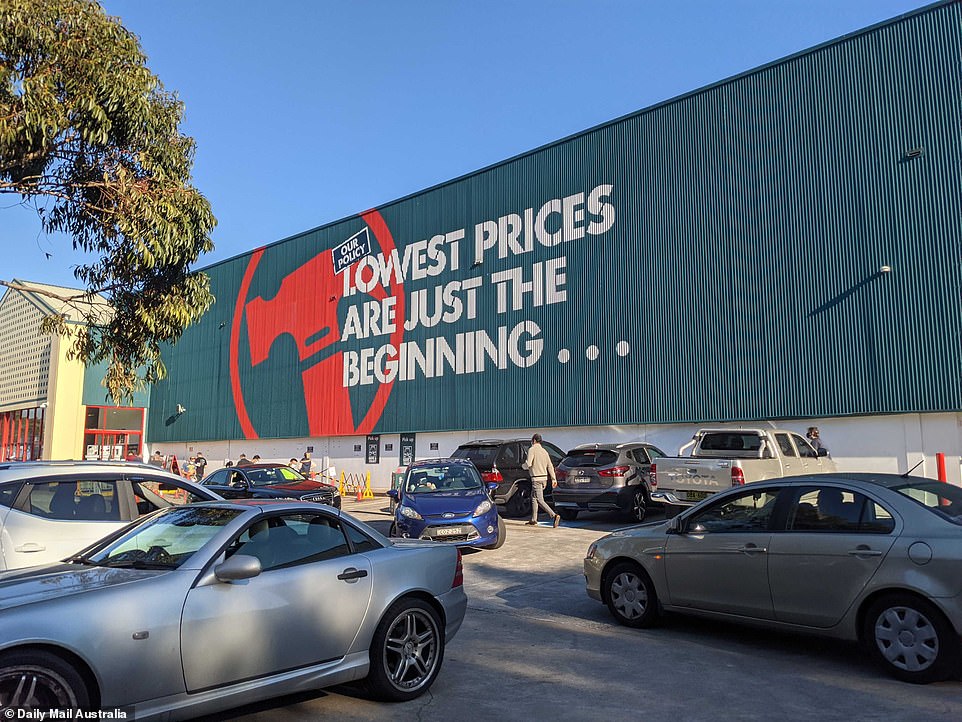 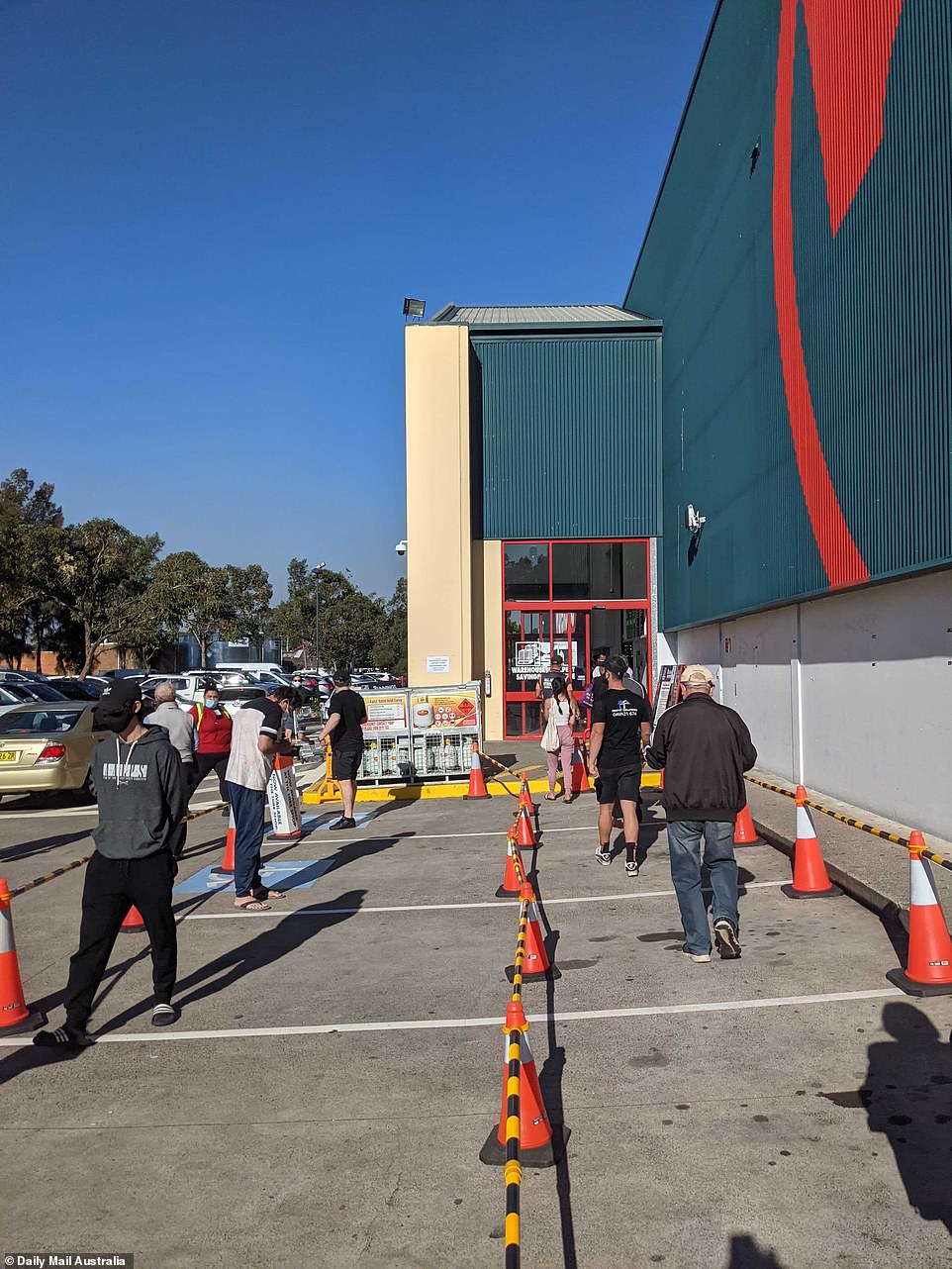 Images from Rockdale and Artarmon warehouse outlets show huge lines of people waiting to get inside despite Bunnings caving in to media pressure last week and announcing they would no longer let customers inside unless they were tradies. 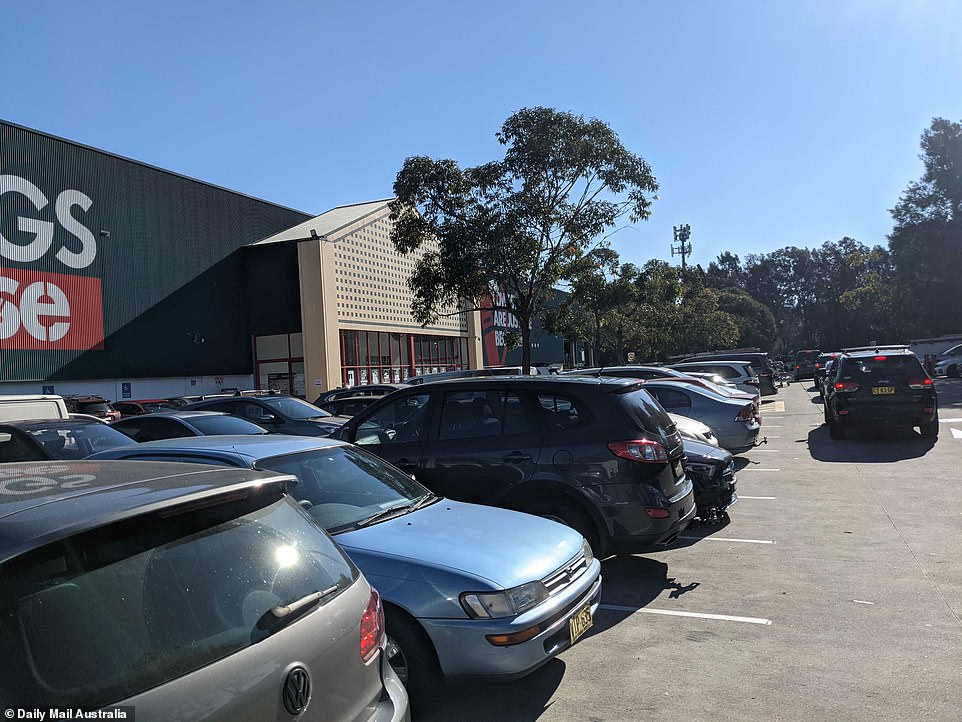 Daily Mail Australia has reached out to Bunnings for comment.

Shoppers were pictured streaming through the doors of the city’s busiest Bunnings store to pick up paint tins, potting mix and new plants on a weekday morning in Sydney.

A full carpark at the Rockdale outlet has seen cars spewing out onto the street waiting to get in to pick up their homewares.

Inside there are huge lines of people waiting to get instore, which will be banned within the 12 LGAs of concern from Monday – although Bunnings have publicly said they will enforce it city-wide.

Bunnings has been deemed essential by the NSW Government throughout Greater Sydney’s nine-week, with people saying Bunnings stay open has become a symbol of how Gladys Berejiklian’s government has so recklessly endangered the country with a weak, belated lockdown – a ‘mockdown’.

Meanwhile, Sydney’s five million residents prove with their repeated business that they are clinging to one of the few freedoms they have left – the right to scour the store’s aisles for Ryobi drills and spak filler – as Daily Mail Australia observed on a trip to one prominent superstore. 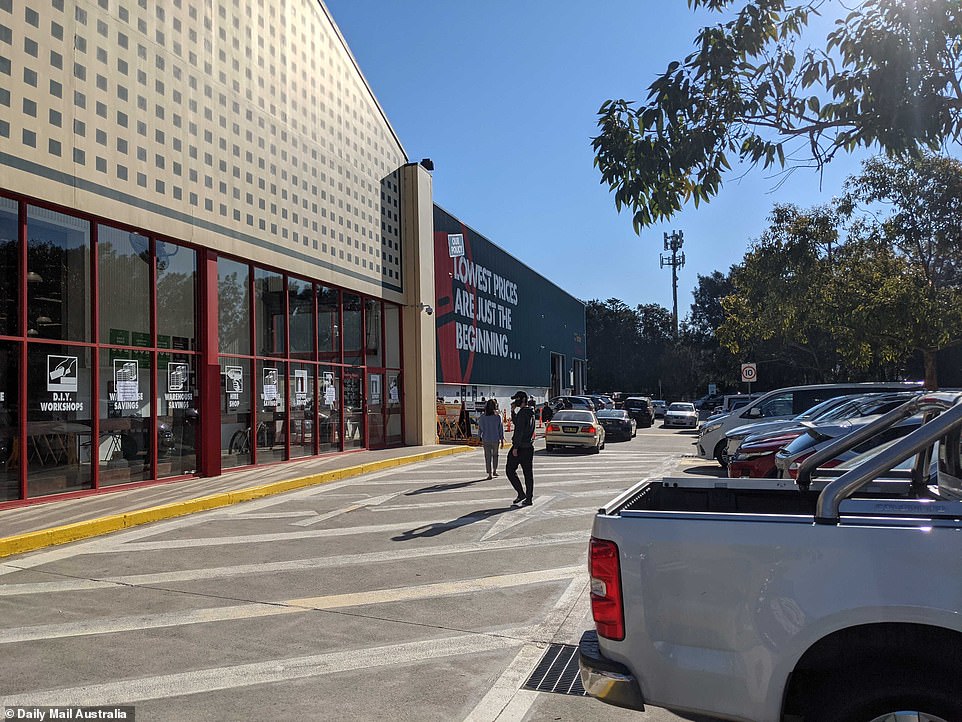 Shoppers were pictured streaming through the doors of the city’s busiest Bunnings store to pick up paint tins, potting mix and new plants on a weekday morning in Sydney 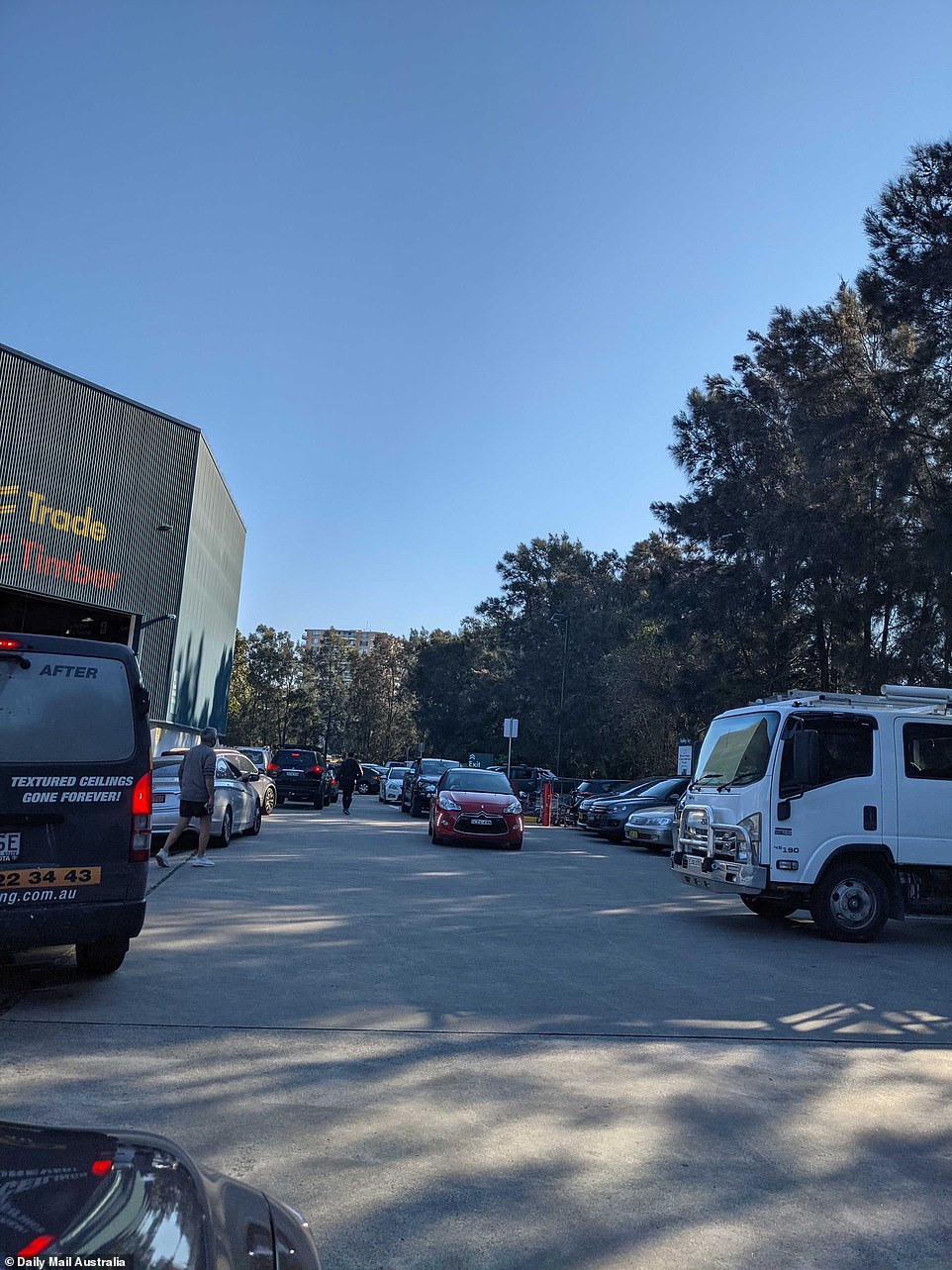 A full carpark at the Rockdale outlet has seen cars spewing out onto the street waiting to get in to pick up their homewares. 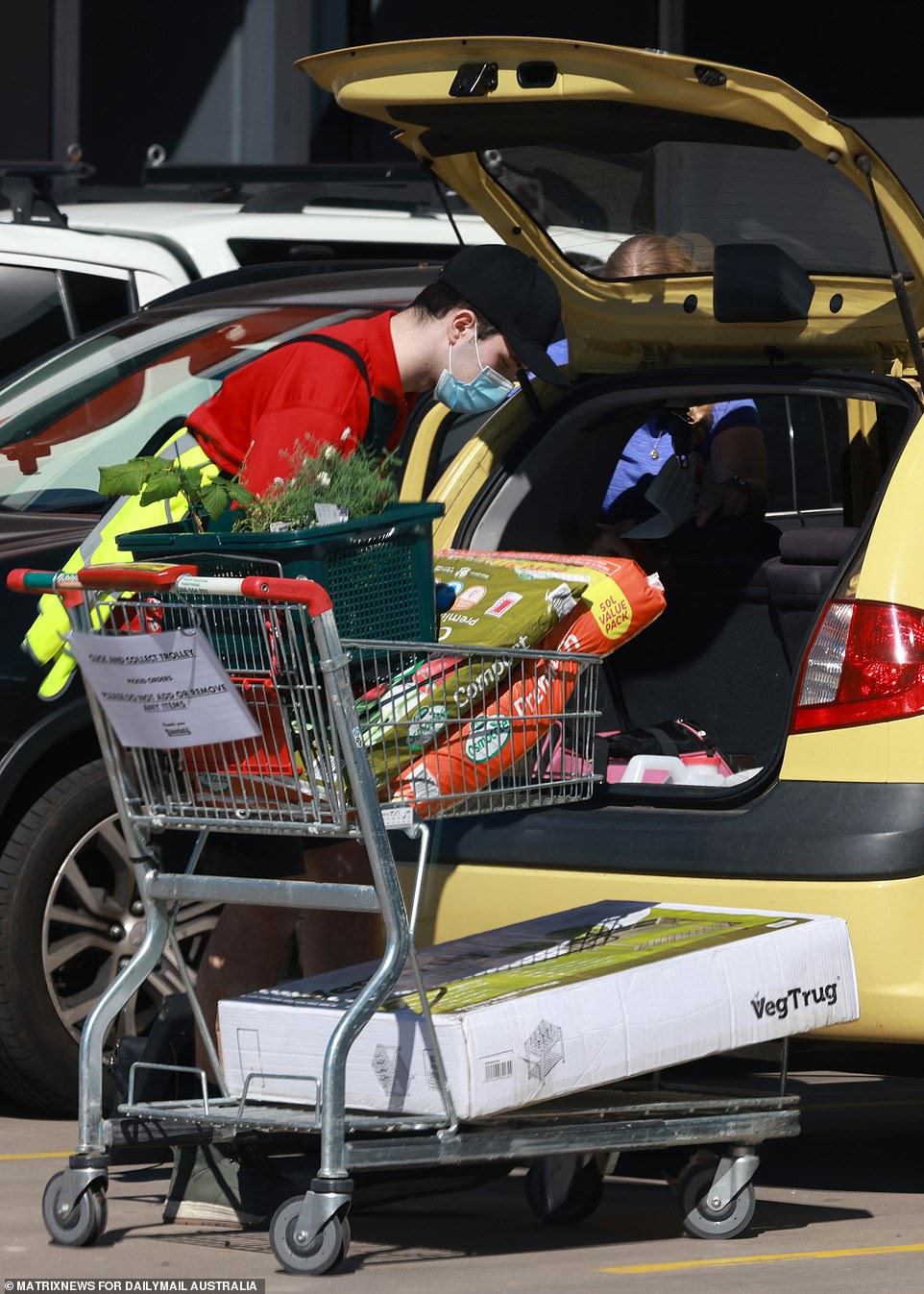 A country divided over gardening supplies: A Sydney shopper clicks and collects a new veggie planter on Thursday – but would have been free to roam the aisles of Bunnings if he wished 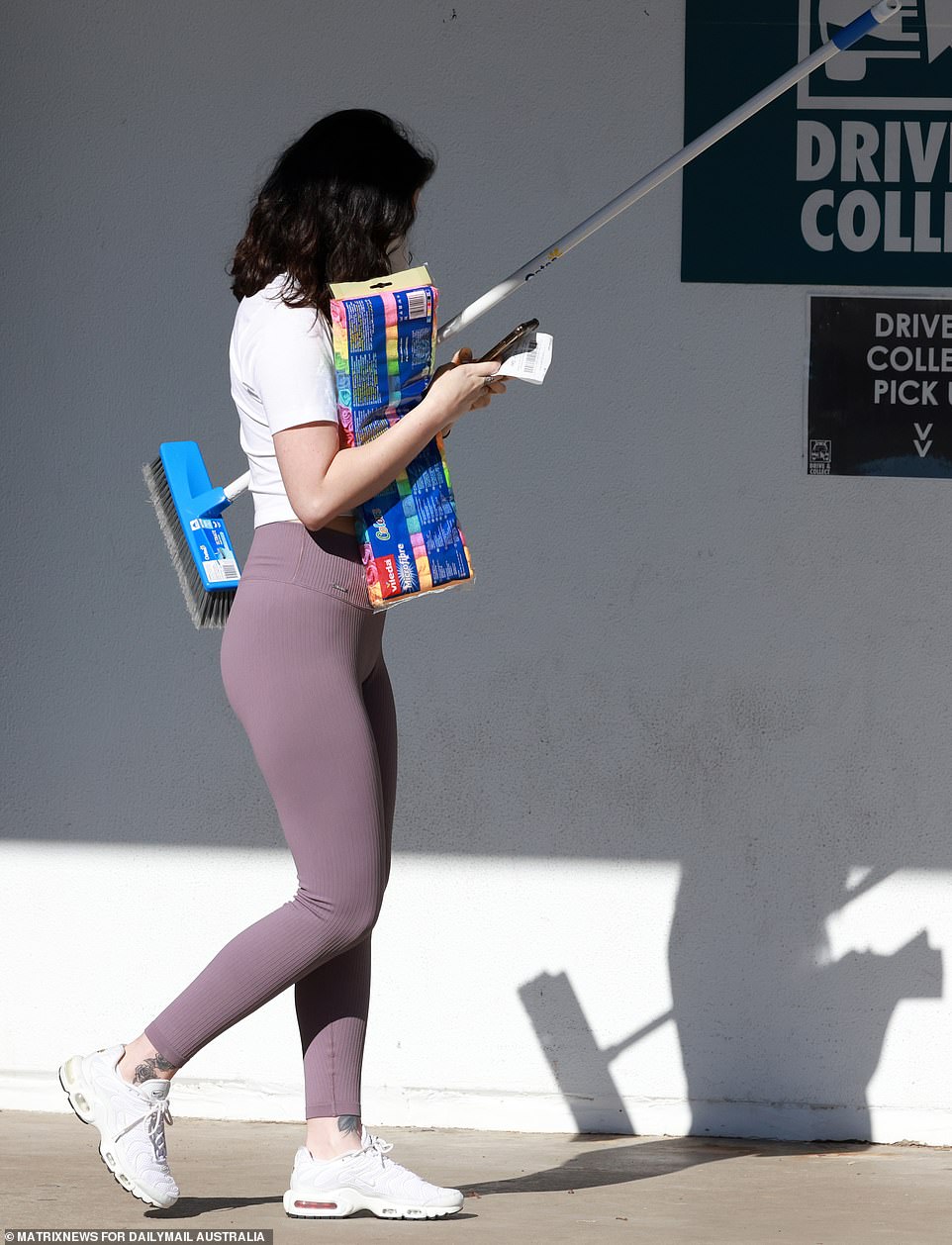 Essential cleaning supplies: A young woman in activewear ducked into Bunnings to collect a new broom and a large set of Vileda microfibre cloths on Thursday morning. In Melbourne, she would have had to order it online

Tradesmen will be allowed to enter the stores under the new restrictions but other customers will need to either order online or use the contactless drive and collect system.

Bunnings stores around regional NSW will remain open to customers.

The popular hardware store had earlier popped up on several exposure sites listed for the state prompting reporters to ask Ms Berejiklian why she hadn’t closed the retailer during lockdown.

Sky News’ Andrew Clennell at the start of the month asked the premier why a range of stores including the Reject Shop and Bunnings were kept open when essential retail was meant to be closed.

Ms Berejiklian claimed NSW’s lockdown rules were ‘some of the harshest’ the nation had seen, but admitted ‘non-critical retail’ such as the Reject Shop should be closed.

‘Why is Bunnings open?’ Clennell asked.

The premier turned her gaze away from the reporter and said ‘next question’, ignoring his attempts at a follow-up.

Ms Berejiklian’s dodge of the question sparked uproar on social media given the store has often appeared on exposure site lists.

Business journalist and commentator Janine Perrett tweeted: ‘Poor form. Berejiklian is asked a very valid question as to why so many Bunnings are turning up on exposure sites and still open to public and she simply refuses to answer.’

Under Victoria’s Stage Four lockdown restrictions, Bunnings was closed except to tradespeople seeking items for essential or emergency repair work.

One Twitter user suggested Victoria’s approach to Bunnings was a model for NSW. ‘It’s not rocket science. 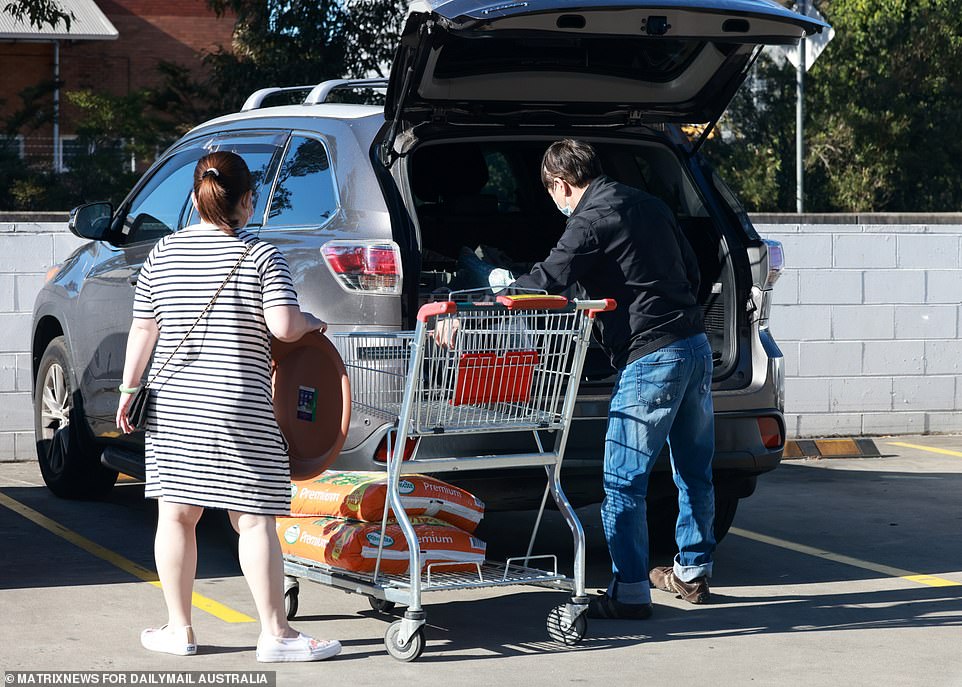 Is this Bunnings purchase proof Sydney is in a ‘mockdown’ … or an entirely reasonable purchase of premium potting mix? Australia is riven by a bitter debate over whether the country’s biggest city keeping the major hardware store open 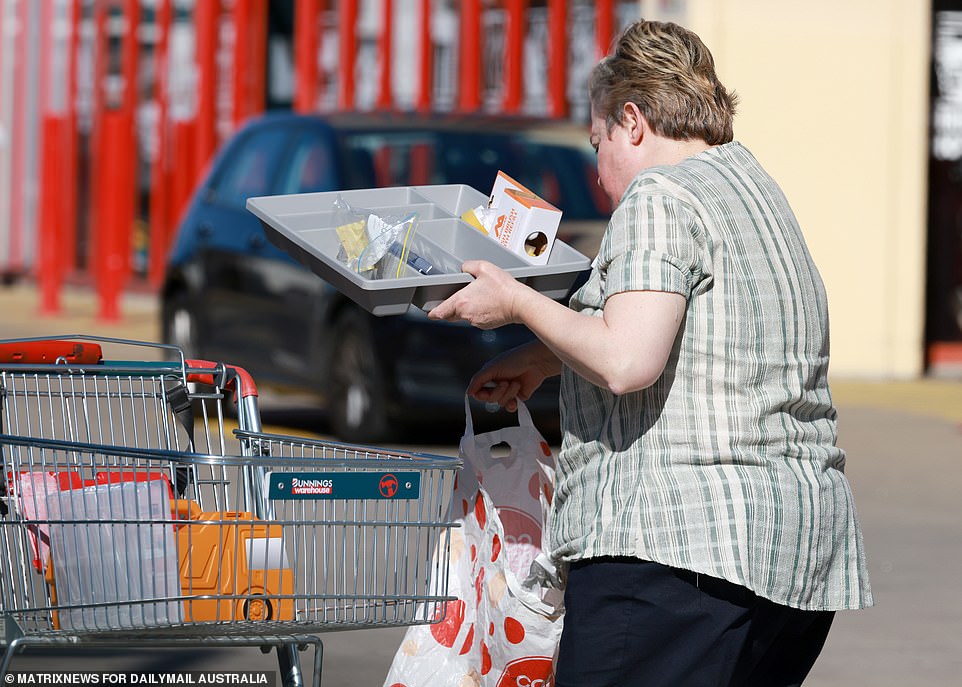 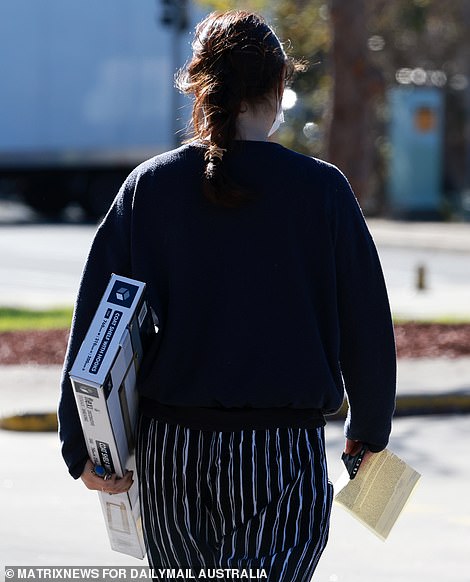 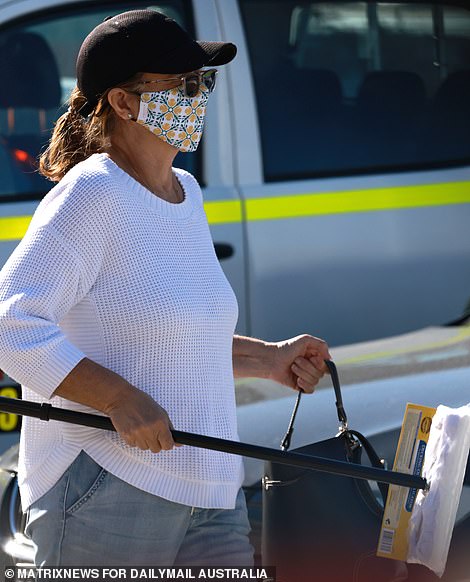 Ducking in for some basics: Dutifully masked customers pick up a shelf (left) and a paint roller (on right) respectively 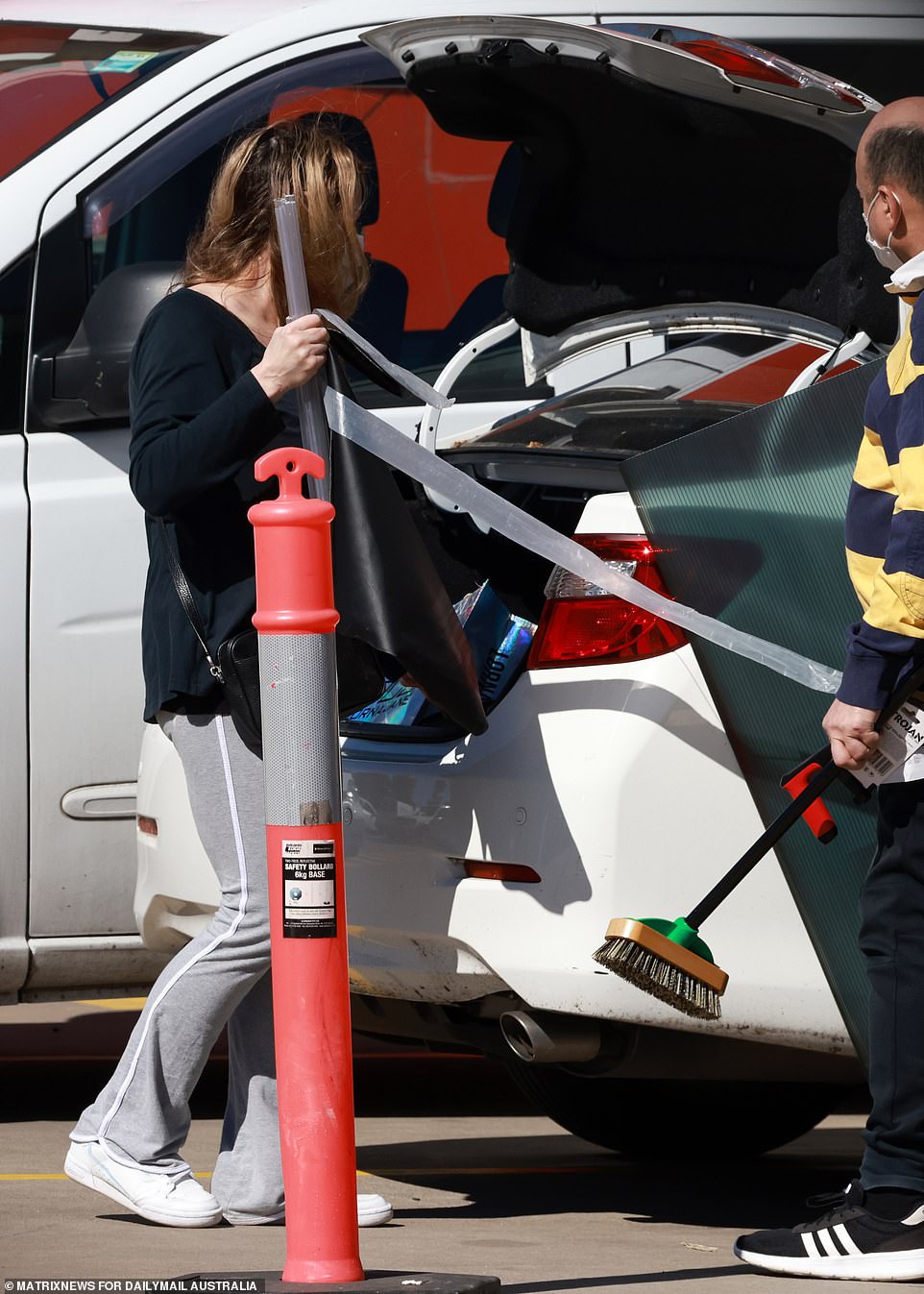 Many members of the ‘close Bunnings’ brigade appear to be anxious residents of other states, who fret the city’s Delta outbreak will engulf the nation.

The demands appear to stem in part from Melbourne’s harsh, but ultimately successful, hard lockdown of 2020.

Then – and now, in the city’s current lockdown – warehouses were only open for tradies, with the wider population required to click ‘n’ collect.

‘Why not click & collect? Like Melbourne does during lockdown? It’s just common sense’, one social media user railed.

There were 20 exposure events at Bunnings stores in the 14 days to August 6.

According to a startling tally, compiled by a Twitter user, there were 20 exposure events at Bunnings stores in the 14 days to August 6.

That included six exposures at Bunnings Greenacre alone – a venue right in the centre of hard-hit south-west Sydney. 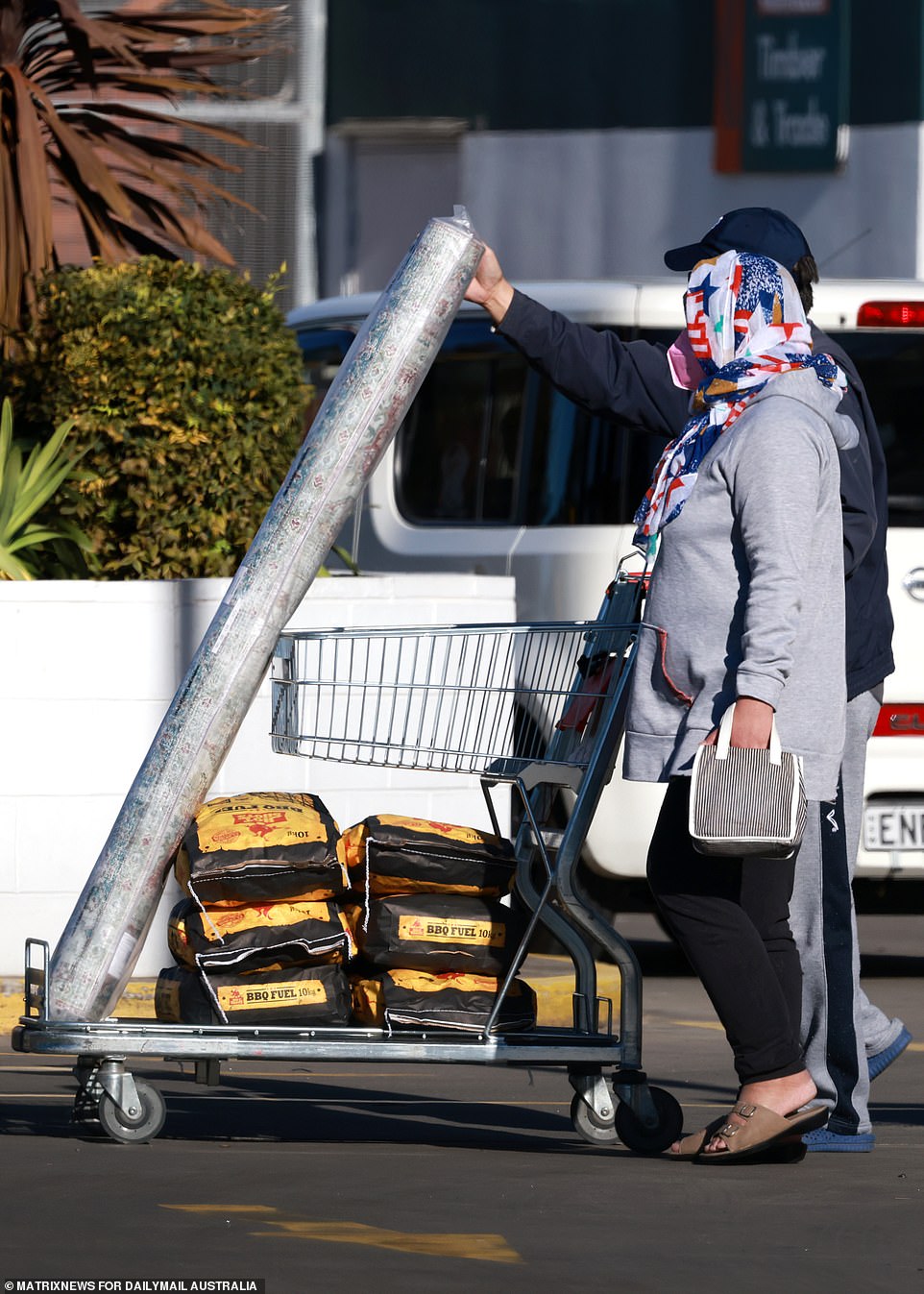 Keeping the fires burning: A couple pick up a half-dozen of BBQ coals and a roll of carpet from the warehouse superstore on Thursday 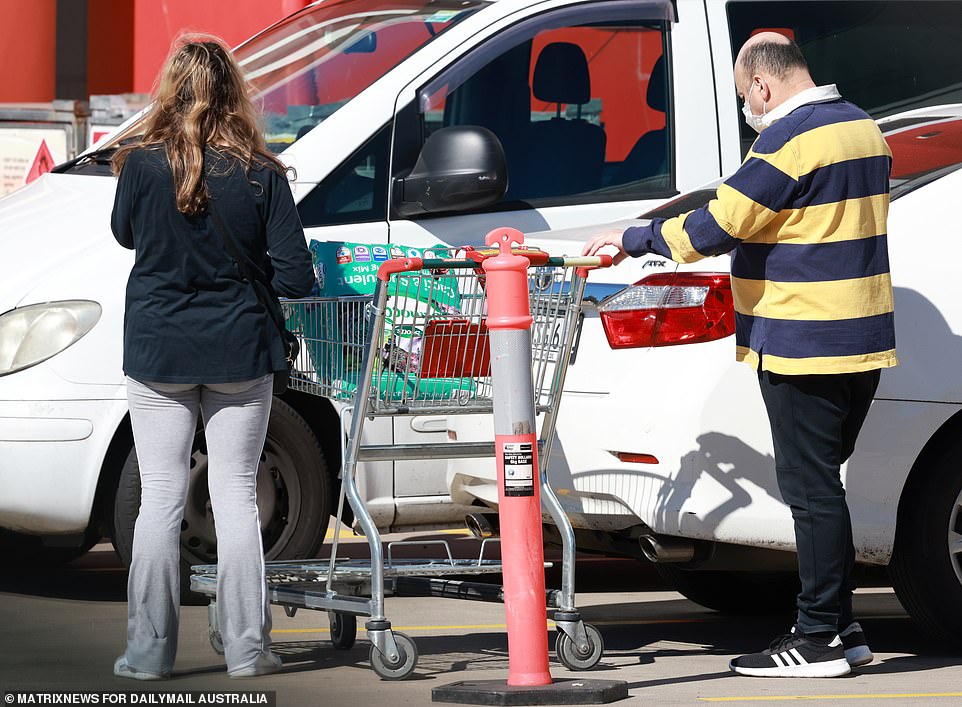 Even some Bunnings staff admit their customers don’t need to be there.

‘Ninety per cent of people don’t need to be here,’ one worker told Daily Mail Australia.

‘They need groceries and petrol only’.

‘Can’t you go harder with this lockdown because what you are doing at the moment hasn’t reduced the numbers? Why is Bunnings open?’